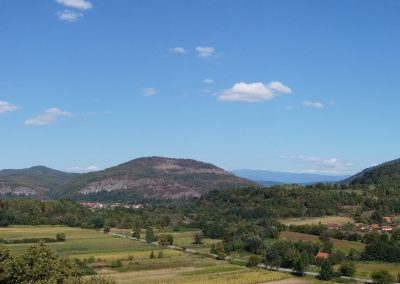 This is a view taken from the western part of the Zărand basin, close to Gurahonţ town, showing in the foreground the two andesitic dome structures to the left and larger view of the andesitic Bontău volcano to the right. They have been generated along important fracture line during the basin generation. 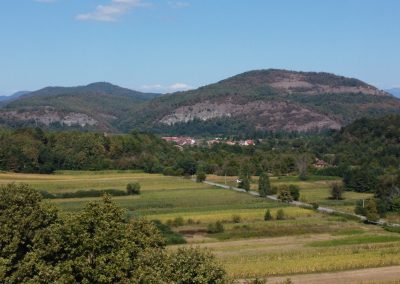 The image is showing closer the two dome structures given in [1]. It is observable that at their lower slopes there is a sequence of multiple layered deposits discernable by their whitish color. Such deposits represent the initiation of dome generation that is characterized by various explosive events some of them including pumice. The presence of pumice increases the whitish color of the deposits. 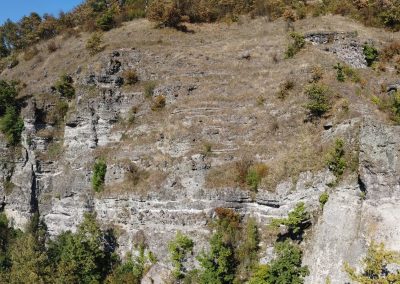 Here there is a closer detail of the almost vertical cliff in layered pyroclastic deposits surrounding the dome. As mentioned before the whitish layers, sometimes discontinuous include pumice, proving the explosive characteristic at the dome initiation. The grayish layers are mostly angular clast-supported, suggesting their origin from dome destruction and fragmentation. 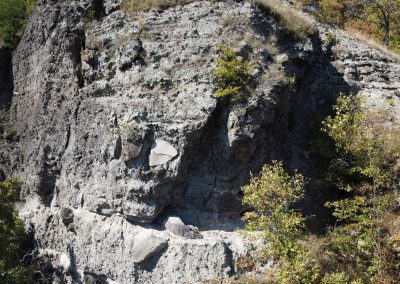 The view is even closer than previous and it is possible to better distinguish the layering sequence. Most of the deposits are decimeter to meter size and mostly are angular clast supported. There is a large size difference between the clasts in the same deposit. 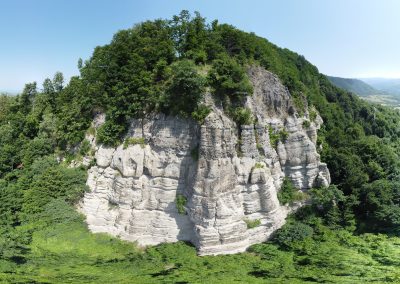 This is a ~50m vertical outcrop known as Piatra Corbului and included as geological reservation. The image is showing a layered sequence of andesitic deposits. At its base up to the one third the layers are thinner, mostly dm- to cm- sized characterized by fine ash material and pumice. Its texture is suggesting a secondary deposition most probably in a subaqueous environment. The upper third part is erosional and is looking as a sequence of thicker deposits, some of them angular clast supported. In the top right of the picture there is a breccia, most possible generated, as the deposits below from dome destruction and fragmentation, either as block and ash pyroclastic flows or breccias at the margins of a dome 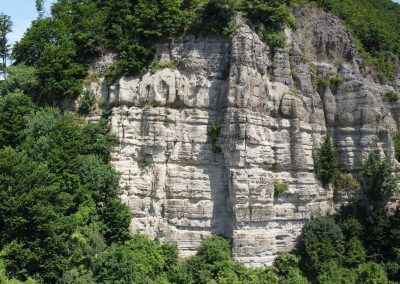 The picture is a closer view of the previous one [5]. Here it is easier to see the discordance between the lower thinner deposits and upper mostly angular clast-supported ones. Such situation is characteristic for the evolution and generation of dome systems in a volcanic environment. 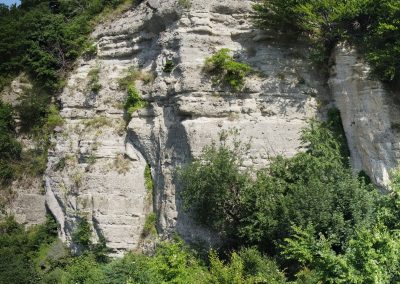 This is a view of the northern ridge of the Cuşma town, western Călimani Mts. It is a sequence of finer and thinner (cam-dm size) and coarser and thicker (meter-size) fragmented deposits, showing a monogenetic composition. Most of them are primary as resulted from the dome destruction and fragmentation. Up to now such deposits were considered to be solely debris-flows (lahars). 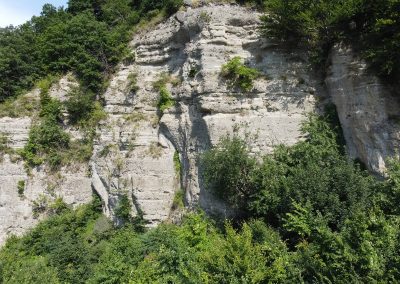 This is a closer view of [7]. Here it is obvious that the lower part is richer in fine and the upper part is richer in coarser layers where large angular clasts are more visible. The situation could be similar as in the pictures [5] and [6], but also the rock petrography is the same, represented by amphibole-pyroxene –bearing andesites. 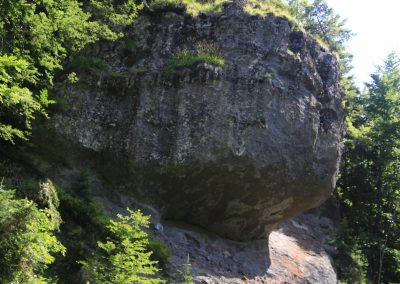 This view is from the Pietroasa valley (see map) and is characterized by a series of dm- to meter-size fragmented deposits. The deposits are matrix to clast –supported and monogenetic suggesting their origin in the dome destruction and fragmentation, either as block and ash deposits sometimes including pumices or dome breccias. The cliff hangover deposit in the upper part is showing an erosional concave base, suggesting an different, younger event. 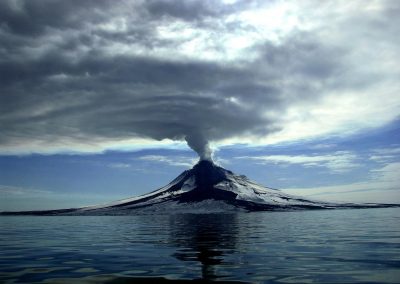 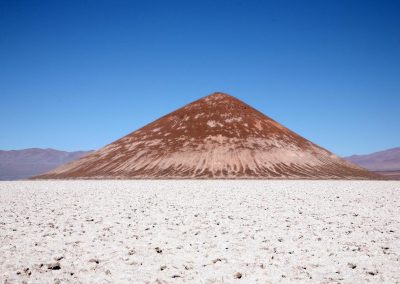 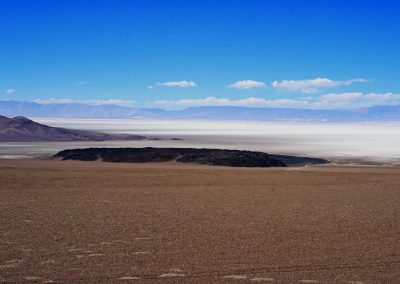 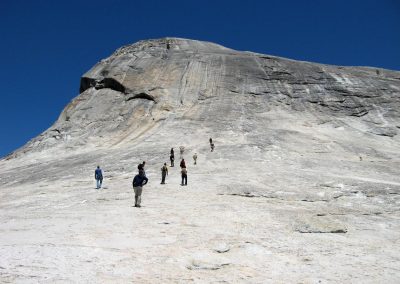 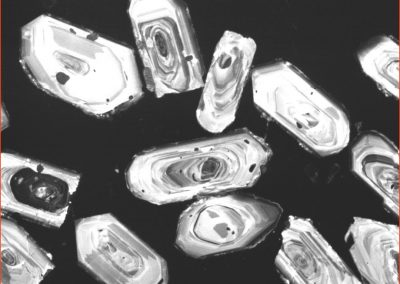 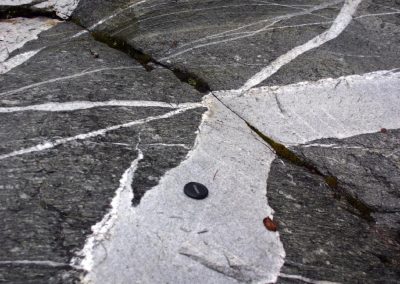 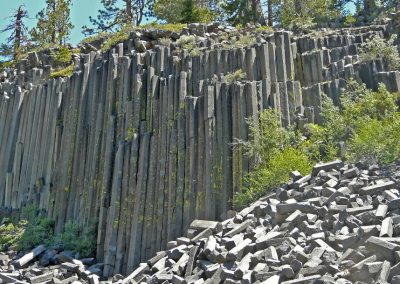 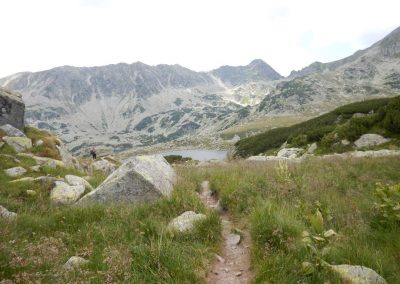 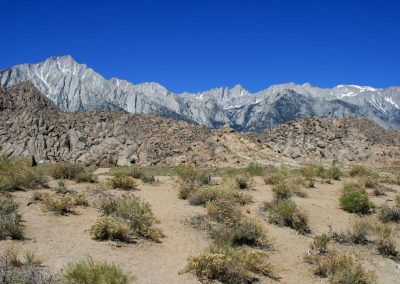 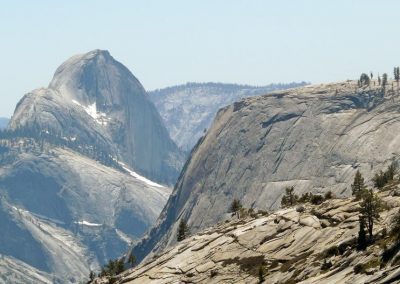 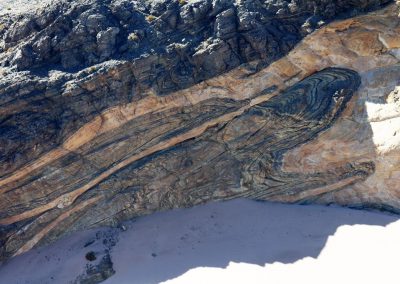 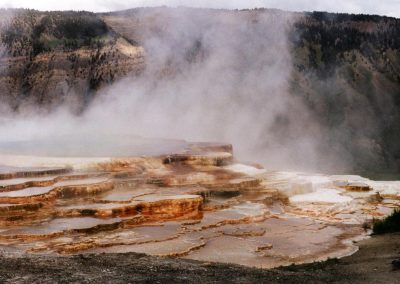 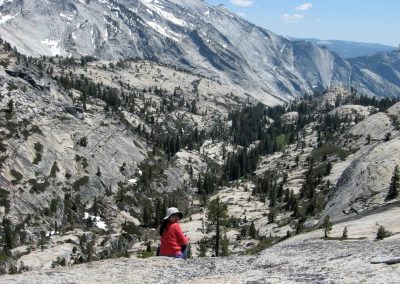 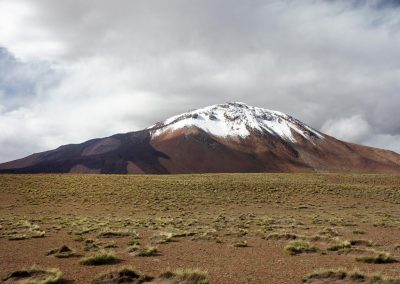 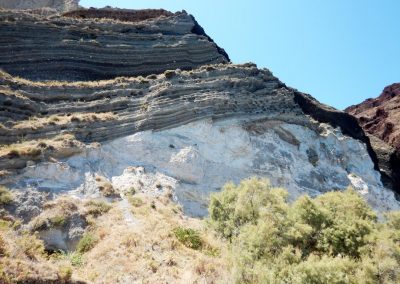 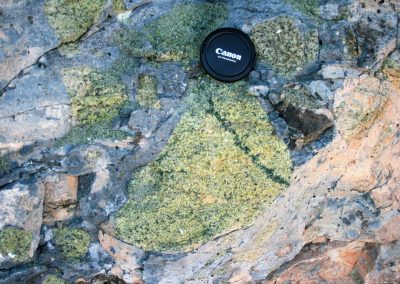 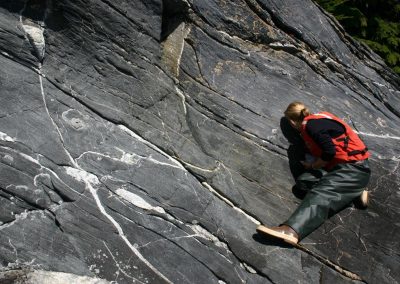